What holds the world together

The paintings and sculptures of Harry Meyer

When does an artist’s biography actually begin? And at what moment does an artist decide when his biography as an artist began? Surely at some point before he finds his distinctive style and thus himself. But then, when? With the first work that was not discarded, whose completion left him with at least a certain degree of satisfaction and perhaps even inner joy? With the first work to be exhibited to the public? In other words, something like opus 1? Or does an artist’s biography begin – quite simply– when he commences or concludes his studies? In the case of Harry Meyer, the painter and sculptor in question, this was initially the study of architecture (1988 - 1993). In his case in particular, this detail should not be ignored.

There is, however, one further key element in Meyer’s development and art in the past 25 years that should not be overlooked either. It was his childhood in the Upper Palatinate, his experiences at the side of his grandfather who integrated both the explicable and the uninvestigated forces of nature in his daily life – such as water dowsing with a divining rod. The world that was revealed to Harry (born 1960) as a boy was one in which physical and metaphysical forces, tensions and (superior) powers acted alongside, and even with, one another. This, too, will have to be mentioned when considering 25 years of art produced by Harry Meyer. And mention will also have to be made of how these active forces can be balanced.

But first of all, we should form a clear picture of what Meyer paints and sculpts. And then we should explore precisely the ways in which he does this – before addressing the most difficult question of why.

So, what does Harry Meyer paint and sculpt? The undifferentiated response may seem rather surprisingly succinct. Meyer paints and sculpts nothing other than what generations of artists have created before him: landscapes, people, skies, gardens, still lifes. Basically, scenes from nature and the world. This appears to have become obsolete in the present day, as the concept and discussion of art has been increasingly widened not only through the new media. Meyer essentially devotes himself to the traditional painting genres and it is indicative that he himself finds the term “painting” more appealing than the word “picture”. Viewers of Meyer’s paintings may in fact be doubly surprised, because specific motif descriptions are often contained in the titles: “My garden”, “Self”, “Meadow with fruit trees”, “Sun”, “Moon”, “Stars”. Is all of this still worth painting and of any interest after centuries of continual modification? Is art today not expected primarily to move forward, throwing light on social interrelations, critically examining the existing situation, subjecting the constant changes in life to highly focused observation?

On the other hand, views and depictions of nature and the human form appear inexhaustible. Even after Liebermann, Nolde, Winter and Schumacher, there are still new individual perspectives and therefore new, competing additions to the gallery of landscape and people painting. Quite apart from the fact that in his landscape paintings Meyer depicts what is disappearing in reality: unspoiled nature. This idiosyncratic painter asserts his independence, correcting certain things, casting aside many an apparent rule of contemporary art, and thus producing something contrary, such as works depicting nature and the human form – not even leaving out the motif of “Mother and child” (1994) that can of course always be regarded as a Madonna. 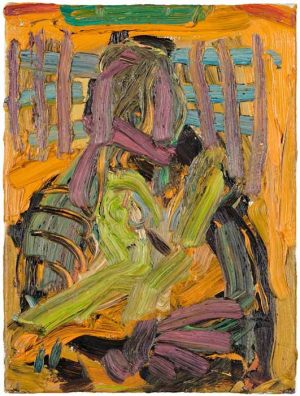 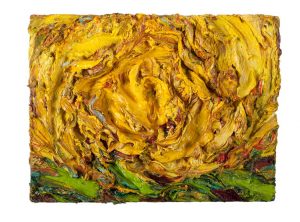 The way in which Harry Meyer paints is of course closely related to his motifs. Essentially, his working style is based not on a contemplative, tranquil, idyllic view and attitude, but on the dramatic reinforcement of that which he perceives. Just as he, as a person, can suddenly become vehement, he fashions his mountain panoramas, rain showers, tectonic faults, sprouting plants, discharges of cosmic energy and head studies as a rule with equal vehemence. Just consider his mountain panorama and its hidden statics and his “Land energy” (2003) where primal forces prevail between earth and sky. Just look at his “Hiberna”, painted in 2006, in which the elements rage in a world without any sense of direction, and at the demanding, invasive twigs and the seemingly grasping tentacles in his “Garden” or “Tree” and “Still life” paintings. Just regard the radiant cosmic spirals of his “Star” painting and his “Head” (1999) in which the brush traces the torn, raw flesh like a scalpel. Here, as with Rainer, Bacon and Saura, there are no limits to the drasticness and pain; in fact, drama turns into tragedy. To that extent, it is an understatement when Meyer says: “When I paint landscape, or rather nature, I also paint Man, with the space in which he has developed; I also paint his gaze through the space in which he lives and beyond which he attempts to reach with his questions.” What necessarily has to be added to this personal explanation is that in several respects Meyer induces an eruptive charge into the laws of nature and the relationships and spaces that he paints. Especially the more recent flower paintings from the series “Still life” lay claim to an exceptional degree of presence, stimulus and tension. 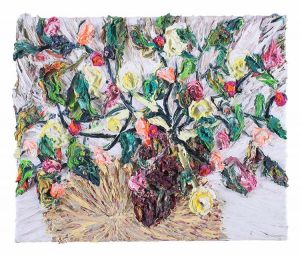 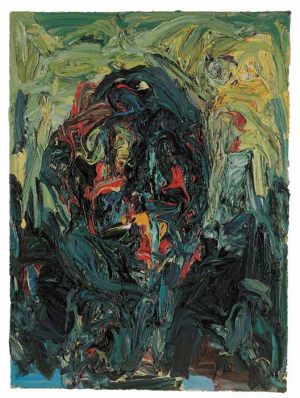 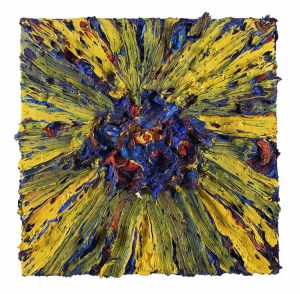 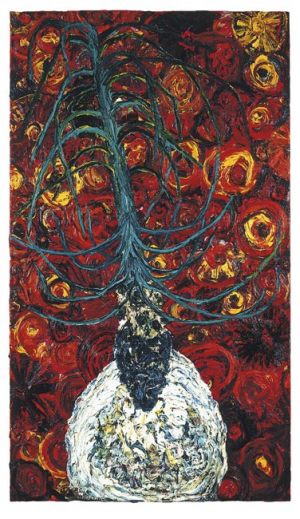 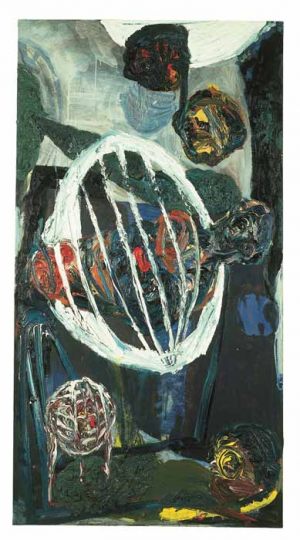 What is it that characterises Harry Meyer’s brushwork, his dramatic pushing and pulling of the earth, his sky dramas, the driving forces of his trees, the physiognomic tension of his “Head” paintings? Here, too, he shows himself to be idiosyncratic and independent in contrast to all current trends. Even though he has somewhat reduced his decidedly impasto style of painting, his – by today’s standards strange – way of piling on paint, and now mixes different brush styles and brushstroke structures much more, allowing them almost to clash with each other, the fact remains: by modelling his paintings and sculptures, giving them three-dimensional, relief-like volume, Harry Meyer shows – here openly, there hiddenly – what seething forces, pulsating electric fields and constructive tensions are inherent in his dramatic subjects. In his landscapes, we see the tectonic push-and-pull forcing its way to the earth’s surface, while in the discharges in the sky and the “Star” paintings the rays of colour and light hurled outwards are veritably palpable. On the one hand, in his enigmatic “Incubator” paintings, to which there are hardly any equivalent motifs in art history, Meyer seems to be examining the conscious or unconscious intellectual and emotional exchange between skulls, while in his “Head” pictures he is subcutaneously searching not only for the fabric and the supply lines of life, but also for signs of mental struggles. Landscape for him becomes the skin of geological anatomy, the face of the emotional landscape – systematically based on considerations of structure, construction and statics. And in each of his painting-models, the solid mass of paint grows into a massive energy carrier. In this condensed abstract style of painting, dynamic content and tangible form are mutually dependent. In fact, the fury and the force of this art, which also, unsurprisingly, contains “Volcano” paintings and for some time now has sought to create disquiet in hard, exploding, toxic colour, achieve a duality of meaning. They stand for waxing and waning, for destruction and (re)creation – and thus also for the cycle of the elements in the Aristotelian sense. Meyer depicts both the prehistoric and the eschatological – and the timeless. 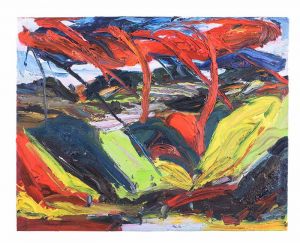 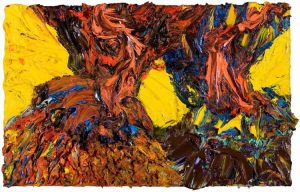 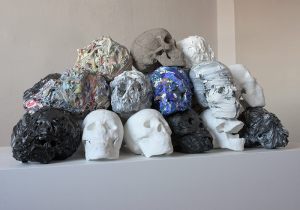 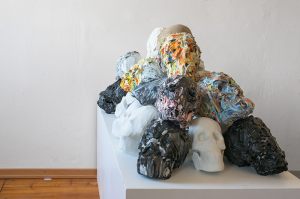 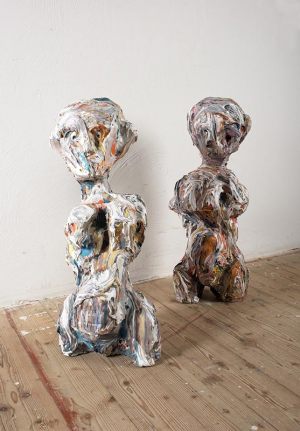 Parallel to his extravagant still lifes, in recent years Harry Meyer has also painted skulls – skulls, it should be noted, that bear the article number NC-1089 and are produced by a company called newgen medicals. They are made of plastic for educational purposes. Their jaws are movable and can be removed in order to study anatomy and function. Meyer makes use of these variation options, as well as altering the volume of the skulls by adding papier-mâché and wood, before bandaging them to a greater or lesser extent with fabric, such as canvas. In the end the skulls lie in layers, like in a charnel house, a catacomb, or a collective burial chamber, as a warning to the viewer. Meyer did not model and paint all the skulls, and therefore the collection can clearly be interpreted as an examination of different stages of decay – from the bleached, bone-dry braincase, to the mummified shrunken head, to the opalescently decaying head in which the biological process of degradation – possibly with the accompanying release of toxic gases – still continues. Here a gruesome grin, there a conserved death cry. Meyer’s “Head” works, his “Figurabilitis” sculptures, seem to have led inevitably to these piles of skulls. Once again, Meyer charges his canvas with elements of sculpture and his sculpture with elements of painting.

How far removed are Meyer’s still lifes, whose extravagant colourfulness is partly influenced by that of modern imaging methods, from his skulls? Not far. Both motifs are nature morte, arranged for artistic effect. Both are traditional symbols in art for the transience of all earthly things and stand for memento mori and vanitas. Again, Meyer presents the eternal cycle of life and nature: all things will pass. It is hardly necessary to mention that for Meyer the candle, symbolising the light of life, is also a vanitas motif. Would it be surprising if hour glasses were also to appear next to candles in his still lifes in the future?

So, why then does Meyer, the assiduous observer, paint? He paints in order to convey a picture of the workings and the soul of Nature – and, with that, metamorphosis and transcendence. He approaches the cycle of coming into being, decay and transmutation both in the context of the known (or not yet explicable) physical, chemical and biological forces that creatively destroy and destructively create and against an intellectual and spiritual background. In this respect, Meyer concurs as a matter of course with Caspar David Friedrich’s verdict: “The artist should not only paint what he sees before him, but also what he sees in himself. If, however, he sees nothing within him, then he should also refrain from painting what he sees before him.”

If one wished to sum up Harry Meyer’s work in the past 25 years concisely in one sentence, one would arguably have to speak of the fact that his artistic volition consists in using the means of abstract, strongly coloured and dramatic impasto painting to capture those energies which are responsible for change in the stages of development, physical state and levels of consciousness of being.

In other words, Meyer attempts to ascertain vividly, perceptively and passionately what it is that holds the world – however firmly or tenuously – together. In that respect, the world for him, strictly speaking, is the parallel existence of several worlds, several world concepts, several world views. And this world – the physical just as much as the metaphysical – this world concept, this world view, remains one that he has to approach from several perspectives – if not indeed, as in his “Rain” and “Incubator” paintings, to discover and circle around it anew. And so it was that this overview exhibition was given the title: “A painter’s worlds”.